The Montgomery County Education Association (MCEA) has endorsed three MoCo Senate candidates: Cheryl Kagan (D-17), Ben Kramer (D-19) and Jeff Waldstreicher (D-18).  Kagan is an incumbent who is running unopposed.  Kramer is a Delegate running for the Senate seat being vacated by Roger Manno, who is running for Congress.  So far, Kramer’s sole opponent is a Green Party member.

Waldstreicher is a Delegate who is running for the Senate seat being vacated by Rich Madaleno, who is running for Governor.   Waldstreicher now has the support of MCEA, MCGEO, the Sierra Club, SEIU Local 32BJ, the Maryland League of Conservation Voters, Fire Fighters Local 1664 and Fraternal Order of Police Lodge 35.  Dana Beyer, his principal opponent, has been endorsed by SEIU Local 500.

Delegate Jeff Waldstreicher has posted a strong financial performance in his run to succeed Senator Rich Madaleno.  He has raised more money over the cycle and has more cash on hand than any other state legislator in the county.  But Dana Beyer has spent nearly a half million dollars of her own money in her three prior races and could spend a whole lot more.  Beyer told Bethesda Magazine “she does not plan to self-finance this year’s Senate bid” but still gave her campaign $109,100.  While Waldstreicher’s cash on hand advantage is substantial, Beyer could erase it with one check.

The recent endorsement by SEIU Local 500 of Beyer may have a big impact on this race.  Prior to that, Waldstreicher could make the case to other progressive endorsing organizations that as a three-term incumbent running against someone who was for 0-3 in elections (two running against him) that he would have a big edge and was the safe pick.  But SEIU is a huge player and brings credibility to Beyer’s run.  Now the endorsing groups may be more likely to evaluate the two against each other on a level playing field and see Beyer as a true alternative.  Our prediction is that this will not be the last significant endorsement that Beyer receives.

The Delegate race is just as interesting.  Incumbent Al Carr had the most raised over the cycle but also has a huge burn rate (81%).  He trails Mila Johns and Jared Solomon in cash on hand.  Johns leads in cash position (boosted by her $100,000 loan to her campaign) while Solomon led the non-incumbents in fundraising from others ($42,011).  Emily Shetty has been a prominent local player since her fourth place finish last time, joining the county’s Democratic Central Committee and doing work with Action Committee for Transit and her former civic association.  But she doesn’t want to trail in money behind Carr, Johns and Solomon to the extent she is now.  Town of Chevy Chase Council Member Joel Rubin’s cash balance is deceptively low since he began campaigning in November and raised $269,845 in his 2016 run for Congress.  Leslie Milano created her campaign account too late to file a January report but says she plans to raise $150,000.  Helga Luest was also a late starter.  Normally, the only incumbent in a race like this – in this case, it’s Carr – would be favored for reelection.  But the challengers are a pack of hungry wolves and Carr is going to have to work to keep his seat.

The Big Question: will there be competing slates in this district?  Both Beyer and Waldstreicher have money, which is much needed by all the House candidates.  Our prediction is that any move to set up a slate by either Beyer or Waldstreicher will provoke the other side to unify too.  Competing slates aligned with contested Senate races were common in District 18 decades ago and another one could really scramble this election.

The Other Big Question: will Delegate Ana Sol Gutierrez stay in the Council District 1 race, where she has not qualified for public matching funds and ranks a distant fifth in cash on hand, or will she return to the District 18 House race?

With the departure of Senator Roger Manno, who is running for Congress in District 6, Delegate Ben Kramer will become the next Senator and the dominant politician in the district.  Kramer, who was first elected to the House in 2006, is known for his work on senior issues and public safety, and has been a true hero in his efforts to crack down on drunk driving.  He has an absolute lockdown on Leisure World and Kemp Mill, two vital power centers in the district.  Kramer is not universally beloved, but he is well respected and no other politicians will mess with him.  In politics, that is enough!

The two incumbent Delegates, Bonnie Cullison and Marice Morales, will sweep virtually all the progressive endorsements and be reelected.  As for the seat being vacated by Kramer, the simple view is that former Raskin campaign aide Vaughn Stewart, who totally smoked the field (including the incumbents) in fundraising, will win it.  But the race may not be that simple.  MCDCC Member and labor attorney Marlin Jenkins did reasonably well in fundraising and should get a lot of labor support.  And attorney Charlotte Crutchfield, who barely lost to Morales for the open House seat in 2014, is running again.

Crutchfield is not a strong fundraiser, having collected just $11,960 from others last time while self-financing $44,149.  But she has a long history in the district and Kramer formed a slate with her in 2014.  Manno endorsed Morales, his former legislative aide, and Morales won by 382 votes.  Crutchfield filed an affidavit as her January report but her new campaign has just started.

The Big Question: will Kramer team up with Crutchfield again?  And if he does, will Cullison and Morales also join in? 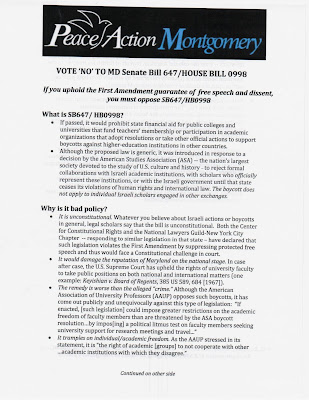 Lots of issues came up at the Progressive Neighbors Forum in Takoma Park yesterday but the issue that generated the most heat was American Studies Association boycott (ASA) of Israeli scholarly institutions.

Peace Action Montgomery distributed flyers at the forum (see page 1 above with 2 and 3 below) arguing strongly against the bill as unconstitutional and just plain wrong. Although many in the audience opposed the bill–no one in the audience expressed support–the bill is not on Progressive Neighbors’ very lengthy priority list.

Sen. Roger Manno was in the line of fire at the meeting. He attacked the boycott and defended the bill’s central goal in the Washington Jewish Week:

In an interview after the hearing Manno explained, “My responsibility as a lawmaker and as a member of the Senate budget and taxation committee, which writes that check, is to ensure that the dollars are spent wisely and that it reflects the values of our community. … And we don’t support [the boycott that the ASA is supporting].”

The same article notes that UMBC has issued a statement condemning the ASA boycott, as have many academic institutions.

There is a certain irony to Peace Action Montgomery’s opposition to the bill. The boycott’s proponents handed out flyers lauding the long history of boycotts to promote social justice from India to South Africa . . . in order to condemn the proposal that the State of Maryland boycott ASA as a statement in support of its view of a more just world.

Thought experiment: What would Peace Action Montgomery’s response be to a proposed ASA boycott of HBCUs?

The arguments that the bill violates academic freedom are specious. The proposed legislation would not ban any professor from supporting ASA’s boycott, attending ASA conferences, or membership in ASA. It just wouldn’t permit Maryland institutions to pay for it. Universities regularly decide which scholarly activities they deem worthy of support. We may not agree with them but the State has a right to decide how to spend its money and which endeavors to support.

In political science, we are experiencing this up close. Oklahoma Republican Sen. Coburn successfully amended the bill that funds the National Science Foundation so that grants may only go to proposals that aid national security. As you might suspect, this has not gone down well with most political scientists. But no one questions its constitutionality or claims it violates the First Amendment.

This issue has a profound potential to alienate Jewish Democrats and other supporters of Israel. I believe heavy majorities of Jewish Democrats strongly support, even yearn for, a negotiated peace between Israelis and Palestinians. Secretary of State John Kerry is working doggedly to address the real barriers to a workable and lasting peace despite extreme difficulties. Nonetheless, ASA’s efforts to isolate Israel offend deeply and undercut them. Jews may not be unanimous on this issue (we seem incapable of it; just watch either the Knesset or Life of Brian) but the vast majority strongly oppose efforts to boycott Israel.

Not to mention that Israeli universities are often the center of efforts to build peace within Israel, which makes one suspect that the academic body of scholars focused on studying America perhaps doesn’t know too much about it. Regardless, I imagine that I am not the only one amazed at the idea that the world awaits with bated breath the opinion of academic organizations on various issues of the day, particularly those completely outside that organization’s area of expertise. (OK: irony of blog-writing academic condemning pronouncements on issues of the day by academics is duly noted.)

Jews are passionate for peace and for Israel. Trying to make them choose is a losing strategy. I don’t think legislators or candidates are going to find it easy to straddle this issue. 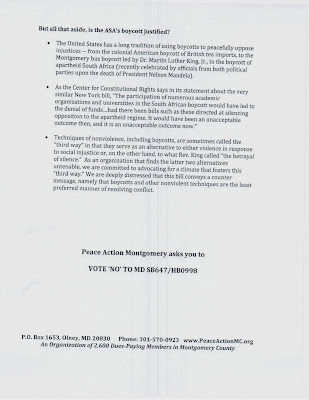 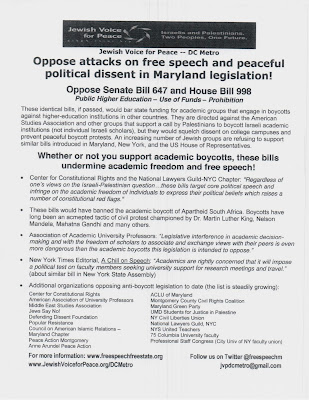